On my morning walk I can across something fairly interesting:

Seeburg was an American design and manufacturing company of automated musical equipment, such as orchestrions, jukeboxes, and vending equipment.

Prior owner has a wide range in the way of musical taste:

If I had the money/space/time I would have hauled that thing home.

The other day as Kay-Kay and I were walking to our building I asked him, “Do you want to draw on the sidewalk?” Without hesitation he exclaimed, “Sure!”

Kay-Kay doesn’t go far without his trusty sock. In it are kept some of his most prized possessions: chalk. It is the cause of incessant arguing and consternation in our household. If Kay-Kay has the chalk, our daughter Kema is fighting for her share, and vice versa. Kay-Kay began taking the “jewels” with him when he left the house to ensure they were safe from his sister’s clutches (he’s nearly 5 while she’s 2 and a half, so for now he’s in control). I just laugh.

Here’s some of our work. I say our because I started out helping, but soon was taking direction from Kay-Kay the art director. The recent rain has since washed it all away, but we were greeted warmly by fellow tenants who passed us by as we worked.

Did i forget to mention that our van got towed Sunday night so I had to walk our son to the ER in his younger sibling’s stroller?  Oh yeah, pull up a chair.

So Kay-Kay and I get downstairs of our Apartment Building and I’m like “Where’s the van b?” (Kind of like how I was feeling when I was waiting for my Roshes).  I knew there was a slim-to-none chance someone vicked me for it (don’t know what the street value of an ’07 Odyssey is) so I assumed the van was sitting in an impound lot somewhere on the other side of town.

After giving him his inhaler and making sure Kay-Kay was doing better Monday morning, my next priority was to locate the van.  Pro Tip: I’ve been towed numerous times, so if you’re ever in doubt as to where your vehicle is, call your Local Police Department’s non-emergency number (usually 411).  Each time a vehicle is towed, the collector is supposed to alert the Local Police, so the owner knows the vehicle hasn’t been stolen.  I was directed to the City Impound Lot over on Lance Road.  Definitely sounding like a deserted and destitute location.

Like I said before, one of the many benefits to City Life is the access to Public Transportation.  I pulled up HRT’s website to find out which route would get me closest to my destination.  But no matter which, I would be needing my walking shoes.  15 minutes to the nearest stop on the route I needed. rarely is door-to-door transport an option.  I grabbed whatever spare cash I had and headed out the door.

Waiting for the Bus

I can understand why public transportation has the “poor and undesirable” stigma attached to it.  Someone from my walk of life would normally catch a ride from a friend or call a taxi before riding the bus.  Most Bus Stops are nothing more than a sign post on the side of the road.  You are exposed to the elements as well as the judgmental stares of passing motorists.  If you have a bench or even better a covered shelter, consider yourself blessed.  You had better have exact fare too, because the ticket taker doesn’t make change (I found this out the hard way).  All dignity and pride are torn from you at every turn.  Most municipalities treat Public Transportation with contempt; it’s something they feel they were forced into as part of some economic redevelopment deal from the late 80s early 90s.

Then there’s the matter of the buses and service itself.  Again, if your City or Locality cares enough to keep the fleet updated with clean-air, energy efficient vehicles (that have functioning A/C in the Summer and Heat in the Winter) count your blessings.  Too often there is refuse strewn about the seating area and floor, poor scheduling that creates log jams or overcrowding, and drivers who have checked out eons ago.  I’ve experienced the bad with the good.  To Norfolk’s credit, they do an adequate job of keeping the units clean and presentable.

The ride to the impound lot was somewhat pleasant.  Labor Day traffic is a far cry from the normal commute.  Jaywalking is a necessity for most people who ride the bus.  With 8+ travel lanes to cross in 25-30 seconds, Usain Bolt couldn’t make it through the intersection in time.  I had another 20 minutes by foot to the impound lot.  You see the foot paths created by the countless souls who’ve come this way before you.  I soon realized the importance of appropriate travel gear.  Comfortable walking shoes are a must if you’re going to be covering a lot of ground by foot, as well as a worthy knapsack or book bag.  Only carry what’s needed for the journey is long and the sun unforgiving.

Many have gone before me.

View from the path

At last arrived at the impound lot.  It was as I imagined it.  Situated at the end of a road in an industrial park on the City’s South East End, it was straight out of central casting, complete with a lone grizzled city employee.  I couldn’t blame her; I’d be upset too if I drew the Labor Day shift.  Once I payed the tow fee and secured my receipt, I took a seat in the lobby, waiting for the lot supervisor to escort me back to my vehicle.  He was with another “customer”.  I used this opportunity to rest and catch  my breath (the lobby was cool and refreshing after my hike from the bus stop).

My only company was a lying-on-it’s back cockroach in the corner.  Probably died from the long wait time.  After what was at least 30 minutes, the clerk felt sorry for me and allowed me to retrieve my van unassisted.  I was glad that cool, calm demeanor had payed this dividend.  She didn’t have to do this, so I thanks her heartily.

There are so many vehicles left in the impound lot; some indefinitely.  Each one has or had an owner, and along with it a story.  But now they sit in rows, silent and still. 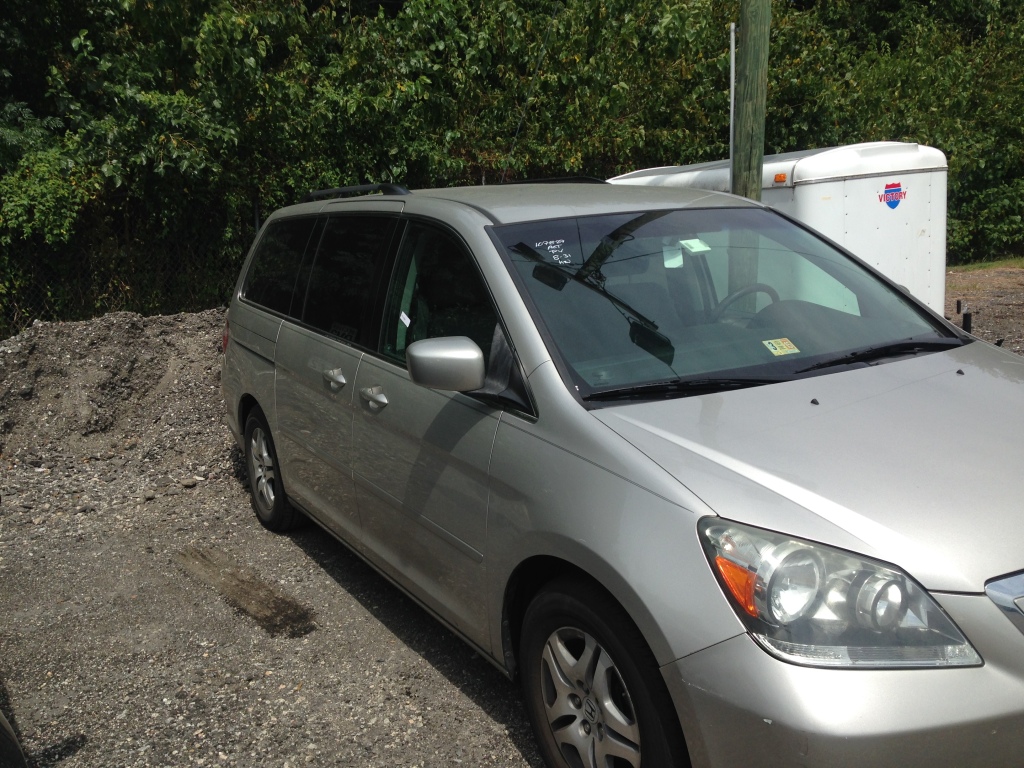 Once I found the van, I started her up, and headed to the release gate.  The clerk opened it up and drive-thru, on my way home.